I have been fortunate to meet both Jen & Jason Watkins owners of Cape Cod Gymnastics, and we've known each other for a couple of years.  When my kids were younger, they had attended the Summer Mini Flips day camp program and loved it!  One day I asked Jen if she had any interest in me bringing the day campers along for a bird walk.  I know that the location of Cape Cod Gymnastics is right on Summer Street, which is heavily wooded and is a great habitat for birds!

We scheduled not one but two bird walks and today was the first one.  The weather was rather gray and a little cool for July, and we had to dodge a few rain drops, but all of the campers were troopers.  We saw birds almost immediately as soon as we walked outside and we heard several species in the woods as we walked along Summer Street.  The young bird nerds were terrific and they used their patience and quiet to help locate the birds while we were on our way.   We had a great long walk, so long, one mini flipper commented that he felt like we'd walked to the "end of Massachusetts!".

Just as I was remarking about how well everyone was behaving, as if a reward... a large bull frog was spotted right in the big puddle on the road!  Don't miss the photos below!  It was amazing to see and also a lesson in just how well and how much native species, (amphibians included!) adapt as needed in their habitat.  I don't think ANY of us will forget that froggy reward!  (double click photos to enlarge) 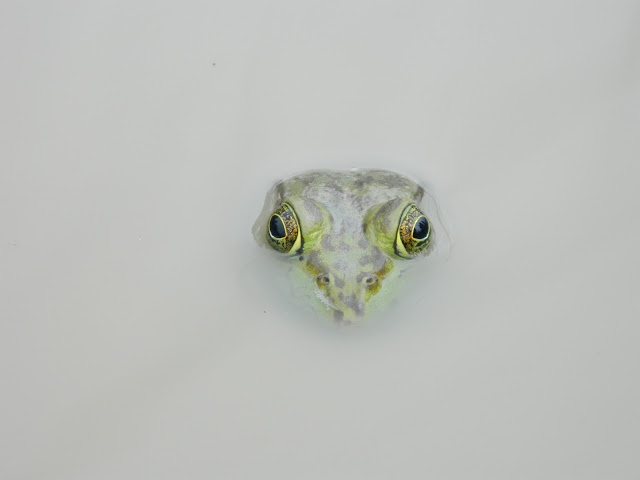 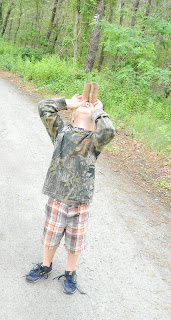 Happy Birding!  I'm looking forward to returning in a couple of weeks to see and hear more bird species... and who knows what else?
Posted by cape cod bird nerd at 1:00 PM