I never know who will show up for Birdwatching For Beginners; the presentation that I give monthly at the Cape Cod Museum of Natural History.  What is always interesting to me is that it is often the case that most who do, already know SO much about birds, what they're seeing, what they're hearing when outside...curiosity is the perfect lure!

I started this presentation about seven years ago when my son was at Country Day Montessori School.  I wanted to get the kids outside, looking for birds, appreciating birds, listening for birds... mostly, I wanted to get the kids outside.  Fortunately the incredible teachers at this wonderful school, which has sadly since closed 😞, brought their students out for sledding in the winter, & playing in the playground whenever weather allowed.  Again, I understand that being enthralled by birds is not everyone's experience.  You never know when they might catch the eye of someone who wasn't even looking though... especially because they can do what we can't... the birds that is... FLY!!!

I do love presenting tips on how to be a better birdwatcher and much of what I say is basic information that you already know, maybe you just never thought of before as skills to be more attentive to which bird is which.  This morning, the weather was raw and drizzly when I arrived at the museum before class, so I didn't intend to bring the participants outside.  The museum is currently closed and being refreshed for the re-opening on February 18, just in time for February school vacation!  I decided to look for birds through the Marshview Room windows - the best seat in the house!  While we were in there, spotting House Sparrows, Black-capped Chickadees and Northern Cardinals...some of the workers and volunteers were attending to the museum's honey bee hive.  They interrupted us to let me know that they'd just seen a hawk in the museum's yard, catch something (breakfast) and fly off with it. I will tell you, I am the first person to change the channel when the cheetah catches the impala...  but they can't go to Stop & Shop. Nature is tough.  Red-tailed Hawks don't go to Stop & Shop either.  This hawk, my guess a female, because she was so large... caught a smaller bird, took off when the audience grew too large, perched on a large branch across Rt 6A, and was feasting on her late breakfast.  Not so cool for the smaller bird who became breakfast, but really cool to see this hawk, doing what she does, so up close and personal. Don't worry, the photos that I got are not terribly gory, there is really no way to identify which species of bird she captured as her prey.  It was an unexpected & interesting end to the presentation though for sure!  The circle of life, that we are so intricately connected to... happening right before our eyes.  It was amazing.  (double click photos to enlarge) 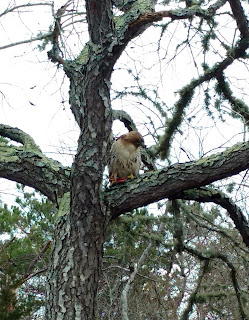 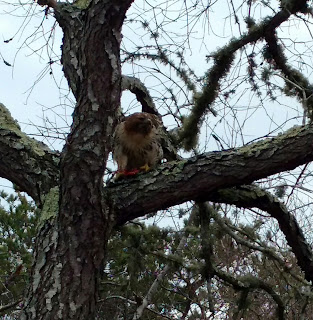 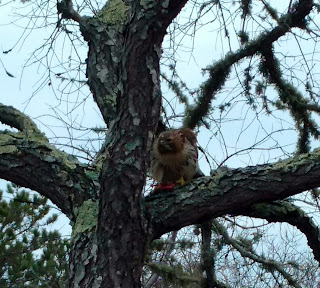 Next opportunity for Birdwatching For Beginners: 2.23.17 10am & another at 12:30. Included with admission to the museum.
Posted by cape cod bird nerd at 10:00 AM No comments:

One of the best things to wake up to on a Tuesday Tweets morning for me is... NO WIND. Yes, there was a chill in the air, but no bitterly cold coastal breeze to freeze us to the bone and lots-o-sunshine to give us the opportunity for a beautiful walk.  Oddly enough, we didn't see too many species of birds, and when I thought of it later, that can be a bit of a drawback to birdwatching on the ocean when it is low tide.  Many of the birds that we did see were hundreds of feet in the distance where the water met the shore.  What a walk though!  Cape Cod Bay is tough to beat when it comes to admiring the open space, the sea's blue hues and the warm winter sun on your cheeks.

An interesting thing that can happen when there aren't as many birds about as perhaps you'd like, you get to noticing other details while you're out appreciating nature.  We discovered a gull's track in the sand, which was made more interesting by the double lined track that went along with it, for most of the stretch of sandy beach we covered on our walk and then some.  We discussed what the lines might be, including a dragging tail, though the lines were off to the side of the tracks... being outside makes you question things and conjure up scenarios in your head.  It makes you wonder, "What happened here?" and gets your brain going.  Fresh air will do that to you. Tuesday Tweets is good for you!

So, we didn't see lots of birds, but we were outside enjoying all that open space and it reminded me of the Rolling Stones' song "You Can't Always Get What You Want". Sometimes being outside for a while and simply enjoying the state of mind it can transport you to, is getting exactly what you NEED.  (double click photos to enlarge) 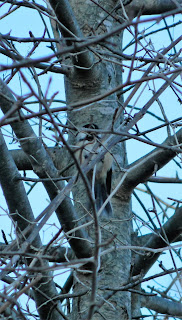 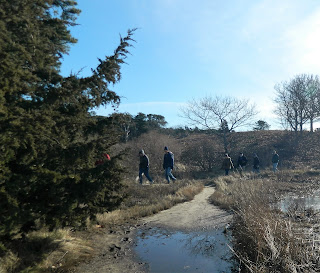 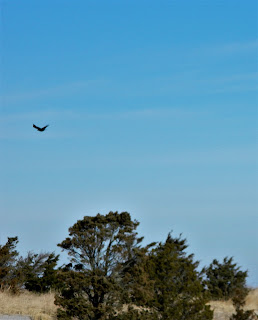 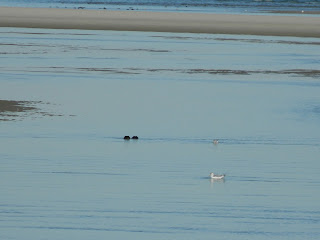 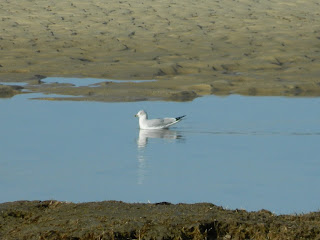 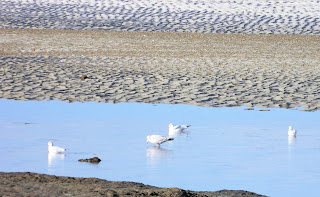 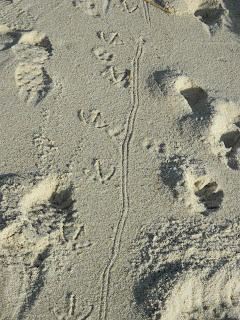 Gull tracks and...?
What do you suppose made the lines in the sand next to the bird? 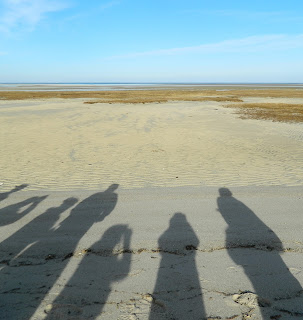 Bird Nerd silhouettes on the sand 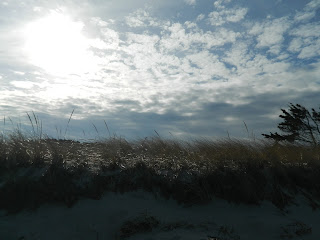 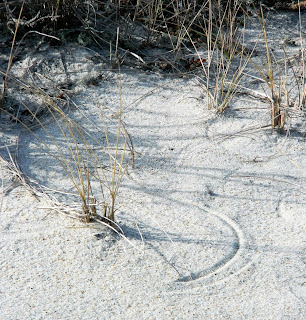 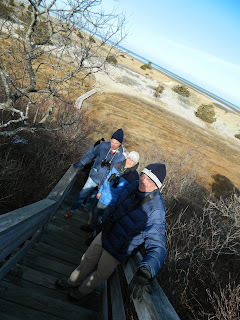 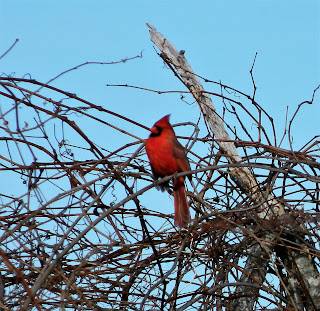 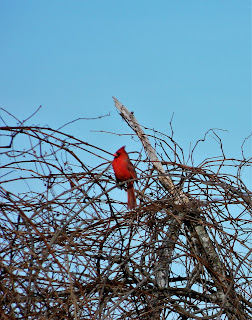 Being a Cape Codder, or as some might say, a washashore (means I wasn't born on Cape Cod - I was born in Boston baby) has many a lifestyle perk, quirk... whatever you want to call it. Much of the time, when making plans with others, we say we'll be there around 4:30-ish. I realize this is not unique to the Cape, ...using the "-ish" suffix to verbally add a window of potentially acceptable time to your actual arrival at your destination.  There are several variables that can jeopardize your travel time.  In the summer we have tourists, there's road work seemingly year round, expansion of the Cape Cod Rail Trail continues (YAY!!!- no complaints!) you know - the typical jam-me-up stuff.  Punctuality does not run in my family either, which is rude.  I know.  It really is.  It's not being considerate to others, but somehow the use of "-ish" helps slightly.  It's common here.  We tend to live at a slightly different pace for the most part, another reason I moved here.

Why?  Why am I bringing this up?  One of the many reasons someone traveling on Cape Cod might be delayed going from point A to point B, is Wild Turkeys.  No joke.  Wild Turkeys have made a comeback HOORAY! and there are large flocks of them provincially.  Their population was almost decimated completely in the 1930's due to over-hunting and loss of habitat.  So it's not just for Cape Codders, this "-ish"ness.  I'm sure there are turkeys all over, making people slightly late for things.  I also know that not everyone shares my affinity for the Wild Turkey... I'm OK with that.  Turkeys only visit my yard here and there, which for me, is an EVENT!  I get very excited!   Naturally, I get equally excited when they cross my path (ROAD!) and I get to see them.  This happened on the way home from the store today. (See photos below)

This particular flock of about 20 turkeys pictured below, was casually crossing over one of the busiest streets in my town - Station Ave.  When I was approaching from about 300 feet away, wondering what that big blob was waiting for the car ahead of me to stop... a huge grin came across my face when I realized, OH!  TURKEY!  This time I had enough sense and time to snap a couple of photos of them.  They were safe.  They waited for the car to stop to cross. They were foraging around at their own pace, causing us to pause, if only a few seconds. Sometimes that is the gift, just pause and admire (stare - whatever you choose)at those crazy turkeys... and to arrive perhaps closer to 4:35ish.