Yes it's still winter, but today was relatively warm and it sure was sunny, and as we approach the warmer weather... I felt it was the perfect time to discuss migration again. Since I've worked at the Cape Cod Museum of Natural History, I've been more aware of the arrival date of "...the star of the summertime show...".  I asked the students if they could figure out which bird species I was talking about.  It's a species we've discussed in class and should be quite familiar to any Cape Cod bird lover...  This species arrives in March, breeds here on the Cape, and in numerous other Northeast regions, raises their young and eventually leaves on migration to warmer climes in early September.  The species is a raptor and eats primarily fish, so they tend to nest and be regularly seen near water.  There is a special camera set up at the Cape Cod Museum of Natural History monitoring their every daylit move on their nest...

One of the students did eventually guess the correct answer: Osprey!  YES!  Osprey!  I have seen an Osprey with the Wixon students in the past but it was only with the winter-spring enrichment session.  I am hopeful I will get to see them again with this particular group. Migration and warmer weather go together because typically, where there is warmth, there is food, and the food makes it possible for species to remain healthy enough to breed. Cape Cod is an ideal Osprey habitat.  Just check out your closest salt marsh... very commonly there is an osprey-nest-ready platform.

I asked everyone to stretch out their arms and guess how long their "wingspan" was.  I also explained that an osprey's wingspan is typically between 5-6 feet long.  We measured the students' wingspans, after they'd estimated what they'd thought it would be.  We also estimated just how many wingbeats they thought they themselves could manage in 10 seconds.  Once they estimated, I asked them to start flapping while I timed them.  Flapping your wings takes a LOT of energy!  The average wingflap speed of these bird nerds was close to 23/10 seconds. (2.3/second)  That's about the same wingflap speed as a heron (Great Blue Heron & Black-crowned Night Heron).  The students were astonished to learn that a Black-capped Chickadee, can flap its wings as fast as 270 times in TEN SECONDS!  hat rate of speed is NOT humanly possible and very difficult to even imagine being able to do.  Humans are not built to fly.  We are built to stand on two legs... can you think of any other birds who rely on their legs nearly as much as humans do?  Not every bird flies with grace, and you must know that there are some flightless birds as well, but they don't live in these parts.  Birds are capable of some incredible things...  We even got to see a couple today! 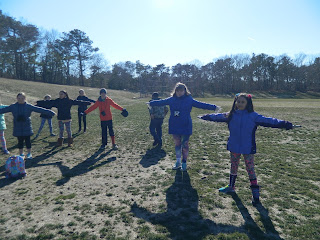 How fast can you flap your "wings"? 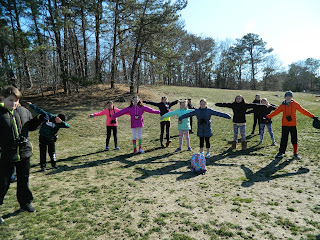 How big is your "wingspan"? 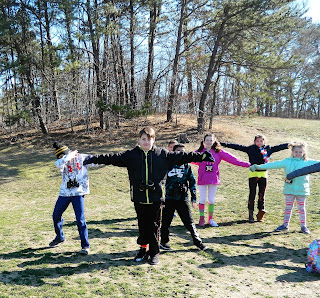 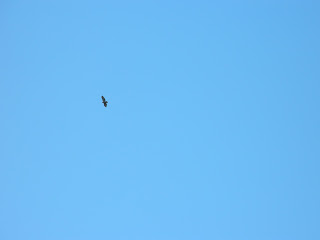 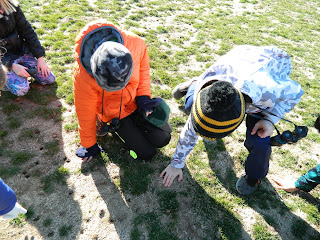 Feeling the warmth of the ground that helps
to create the thermals (warm air currents) that birds, raptors
in particular are able to soar on, so they flap less. 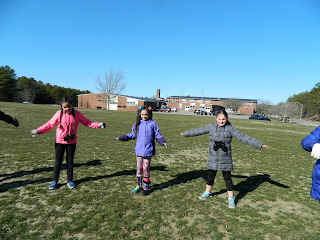 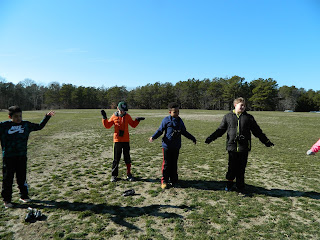 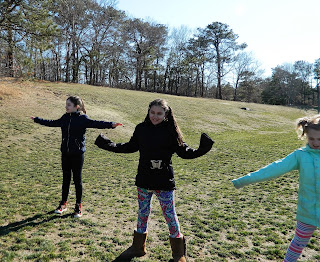 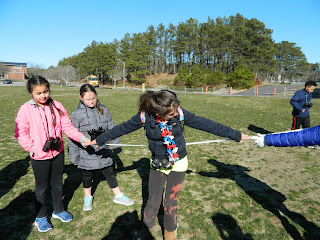 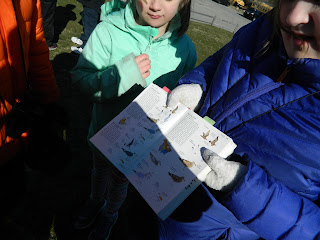 Referring to the field guide to look at Herring Gulls