So eight brave bundled up Cape Cod Museum of Natural History members joined me for Tuesday Tweets!  Its so nice to be greeted to smiling faces on a chilly morning.  With the winds, I just wasn't sure who we'd end up finding in the hour we had together.  The sun was a huge help, it turned out, and I thoroughly enjoyed our morning walk while we adjusted to the seasonal temperatures.

As we began on the trail next to the museum, I noticed a Mourning Dove, cleverly disguised as a rock, about 20 feet in front of us.  S/he was all hunkered down from the winds and it's not common to find them solo.  I snapped a photo and asked our group to just wait for a minute, just in case this was an injured or sick dove.  Well s/he seemed fine and as we all slowly approached, s/he took off providing the familiar Mourning Dove flight sound.  It seemed all was well.

Sometimes I'm guided by a, "Let's just check out this spot...", which is how I was feeling about the salt marsh this morning.  I was NOT going to head all the way to Cape Cod Bay today given the elements we'd be facing.  When it's so windy and cold that your hands are shaking and your eyes are watering... it's not a good time to be at the shore.  I did want to glance at the marsh though, and I'm so VERY glad we DID!  There was a Northern Harrier female hunting over the marsh!  What a sight!  She wasn't really close to us, but we all got to take in her arial stalking and hunting of something out there.  Pretty soon the cold got to me, so we headed back to the shelter of the trees & to (what I like to call) the "secret trail".

We made our way to the south side of 6A as well, to the observation deck that overlooks the marsh.  Suddenly the sun beams took over and it wasn't quite so cold.  We were then pleasantly surprised by sighting after sighting, including 3 White-tailed Deer!  About a minute or two before they came out of the foliage, extremely well camouflaged, I KNEW I could hear something walking in there - though I couldn't see - until they showed up!  I was TOO EXCITED to get a decent photo, but I tried.  It was just one of those "had to be there" instances... it was a gift.  Yes, Tuesday Tweets is primarily about birds, and nature in general of course... when an unexpected mammal shows up, it's that surprise BONUS!  We were all SO DELIGHTED!  When I'm out there, appreciating all that I'm surrounded by: birds, trees, sunshine, DEER (!!!) and I'm with the same type of nature-loving folks... happy doesn't seem a big enough word to express how it all makes me feel.  Fulfilled.

As if that wasn't enough...as we were leaving and about to cross 6A, Regina (a returning Tuesday Tweeter) and I first heard and then spotted, not one but TWO Belted Kingfishers darting this way and that, right over the road,calling out all the way,  and eventually flying off in different directions. It was the ultimate finale!  What a terrific Tuesday Tweets! (double click photos to enlarge) 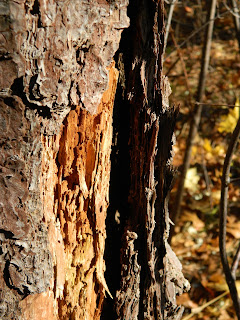 Damage to a pitch pine from beetles, birds & mammals 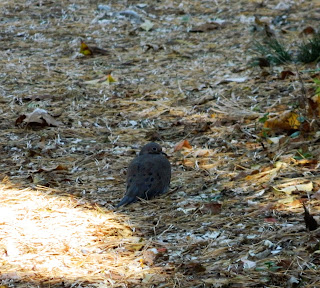 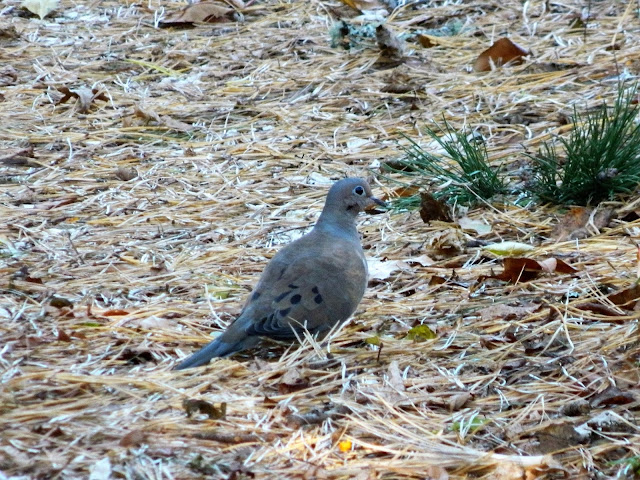 S/he is OK, and flew off as we slowly approached 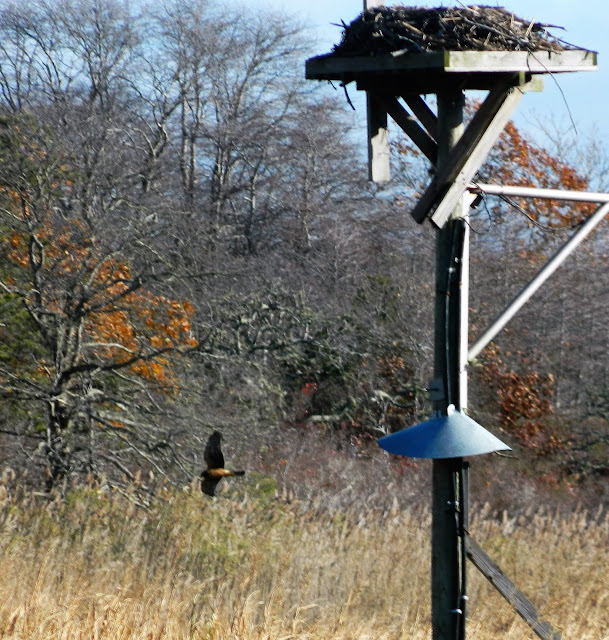 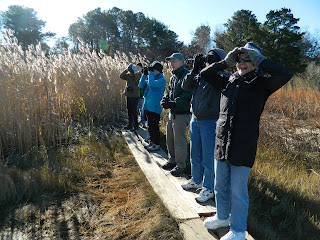 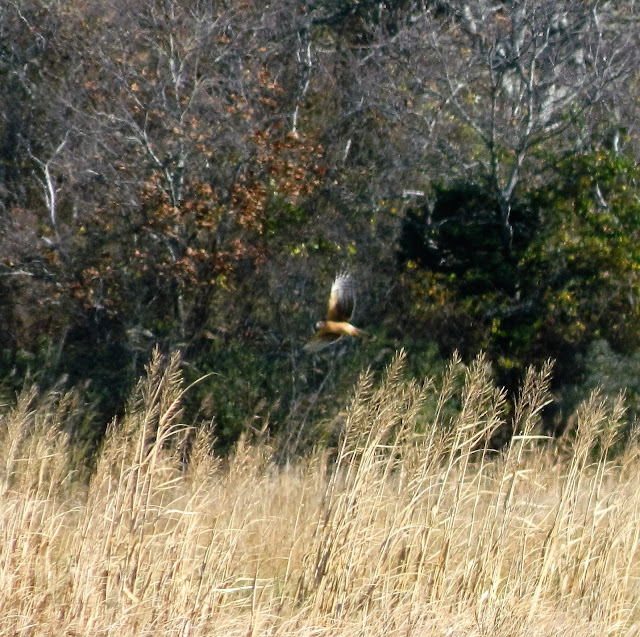 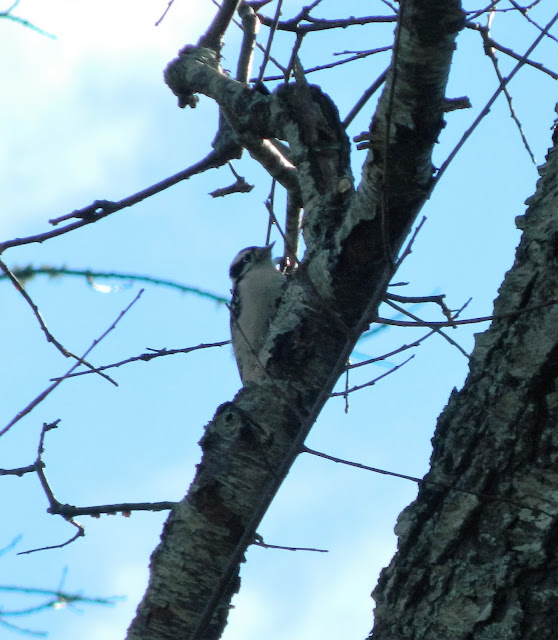 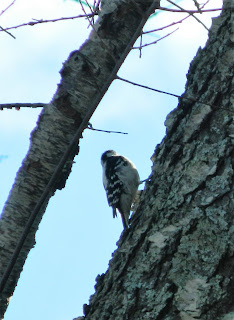 Downy Woodpecker - female
(note: no red spot on the nape of her neck) 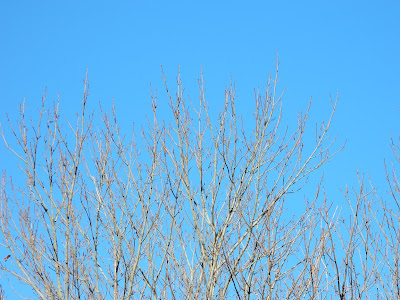 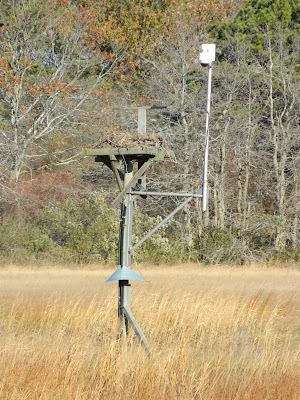 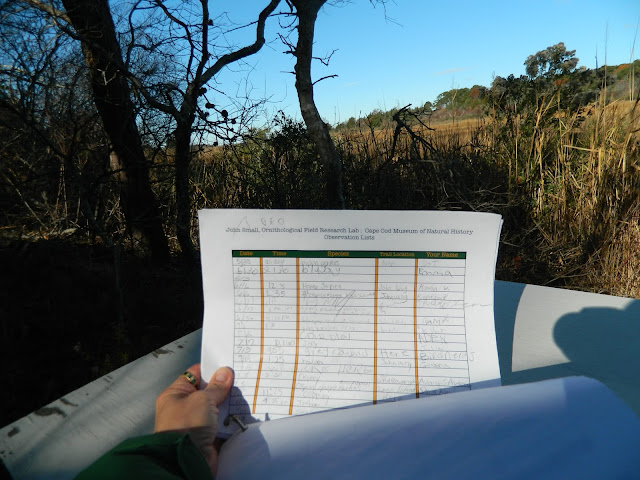 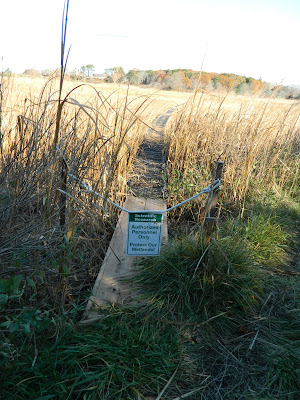 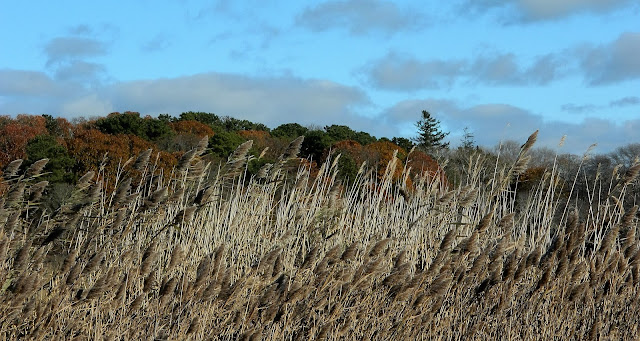 The colors of Thanksgiving week on the salt marsh 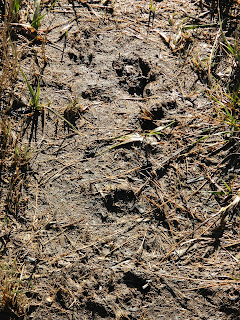 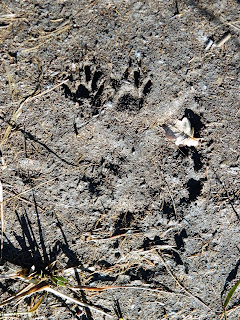 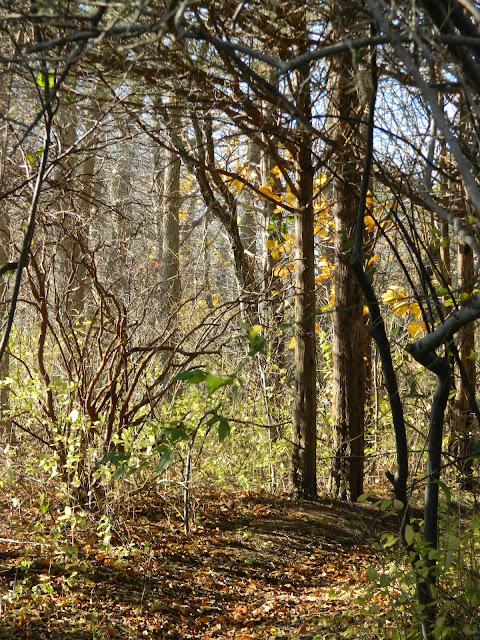 On the secret trail 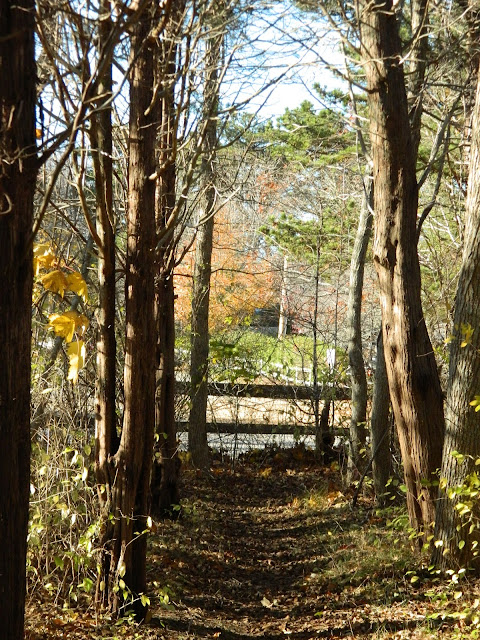 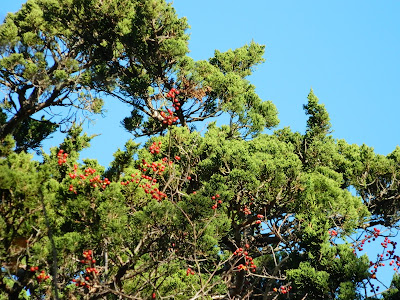 Bittersweet climbing up the evergreen 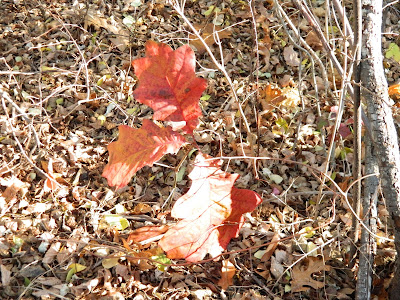 A young oak sprouting its leaves and showing
off autumn shades 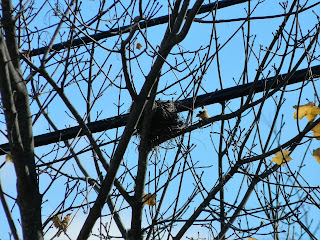 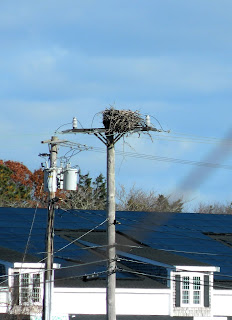 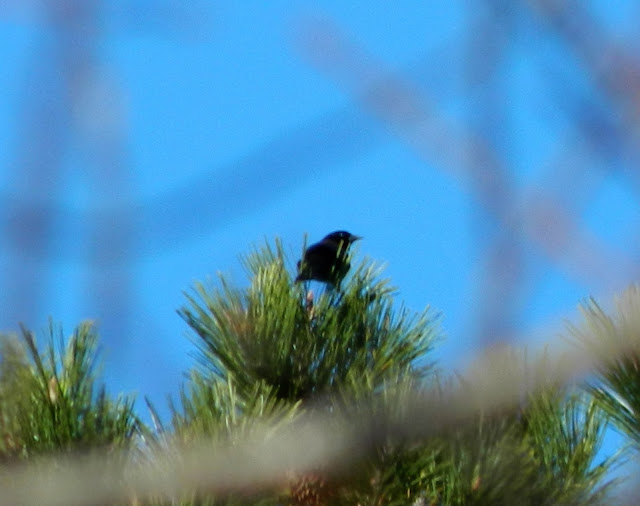 I am wondering if this is a Rusty Blackbird... the tail just didn't seem long enough
to be a Common Grackle's, though I realize this photo does not show the tail length 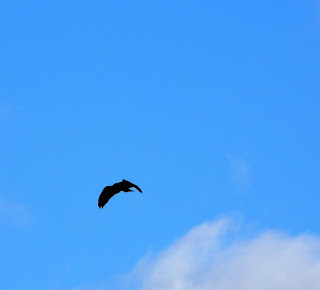 Red-tailed Hawk, not a welcome silhouette if you're a small mammal 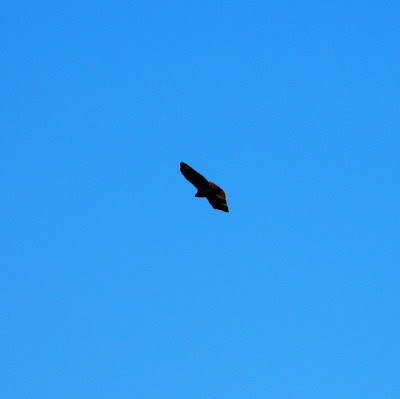 Red-tailed Hawk, you can barely see the sun
showing off the reddish color of the tail 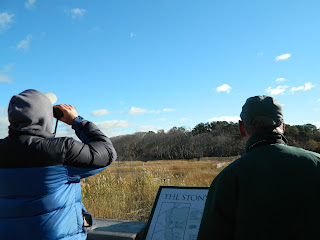 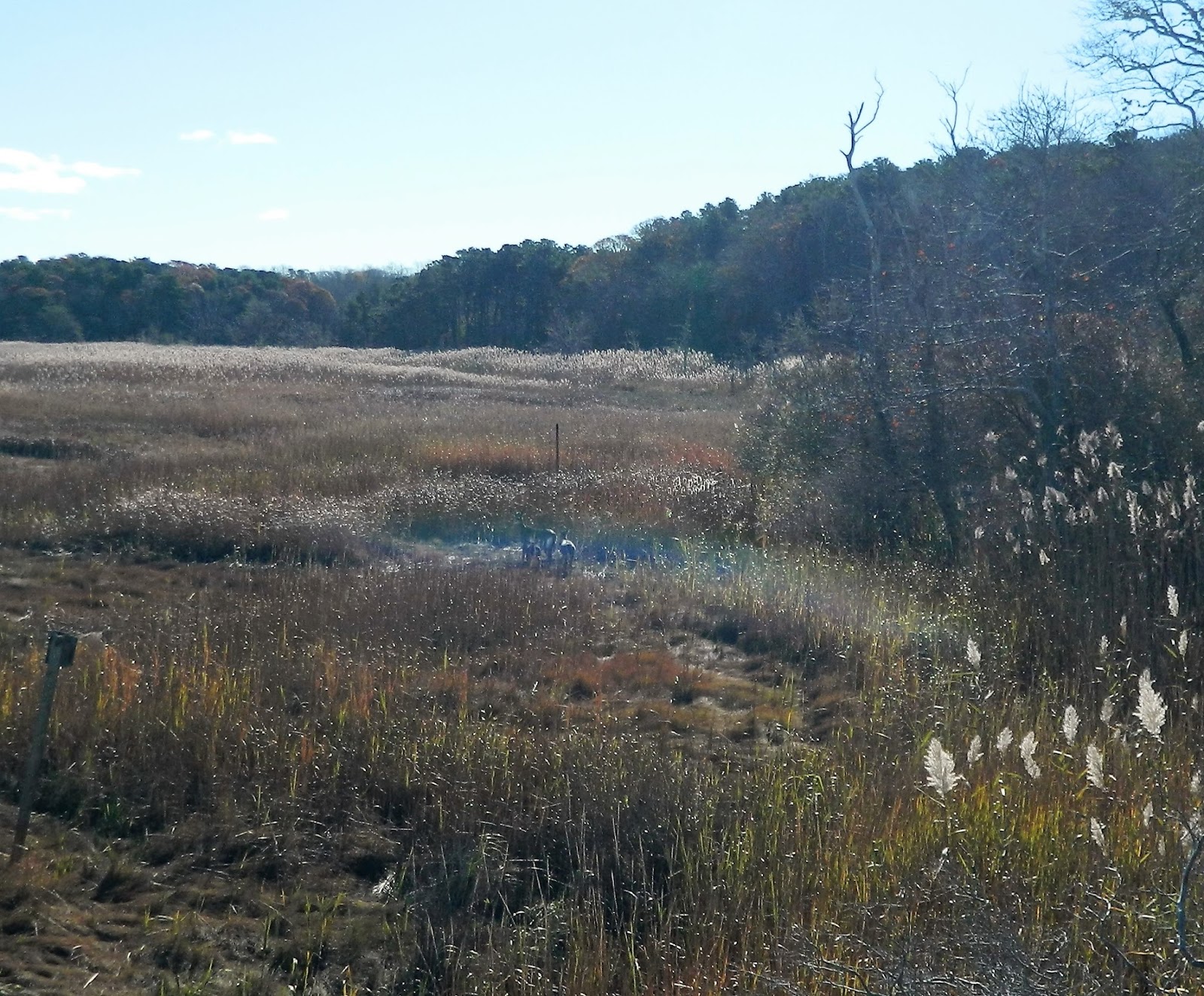 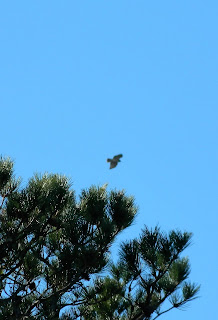 Looking southward over the Paine's Creek salt marsh - it was so
warm in the sun, despite the chilly wind 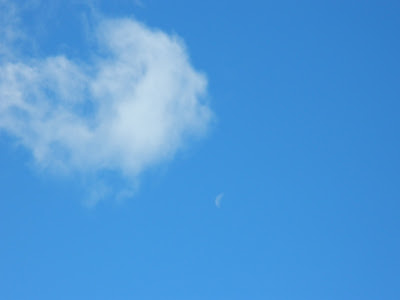 Remnant of the super moon 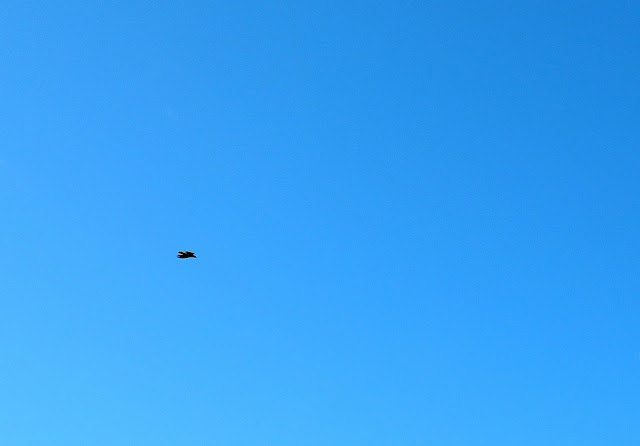