Saturday afternoon was beautiful and we had spent a lot of time outside.  I had been collecting things in the yard and putting them away, because it's supposed to rain all day tomorrow for Father's Day.  As I was in and out of the house, I heard a bird call that did not sound familiar to me... That always intrigues me, much to my family's dismay at times, because then that sound, and identifying who it's coming from, becomes my temporary obsession for however long it takes.  I ran in to grab my camera and binoculars and it took a while, and a LOT of neck stretching, but I finally was able to see who was making all the racket!  It was a Baltimore Oriole male, frantically trying to feed his 2 youngsters who were relentlessly badgering him to do so.  They were VERY DEMANDING even though they could fly, the babies seemed to not want to fly long distances.  Every time he got too far away for their comfort, they peeped extra loudly until he hurried back to them, beak full of something - some type of bug no doubt - to shove into those peeping mouths!  My photos are less than great, it's the best I could do with the speed at which daddy oriole was moving to appease those 2 loud, adorable, mouths!  (double click photos below to enlarge) 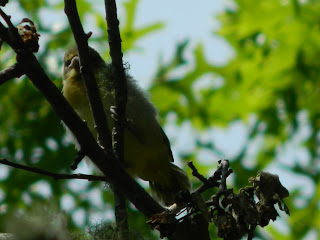 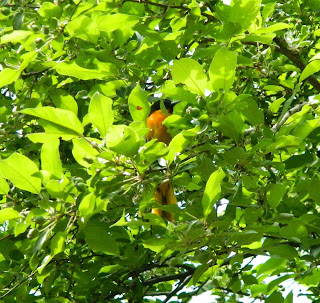 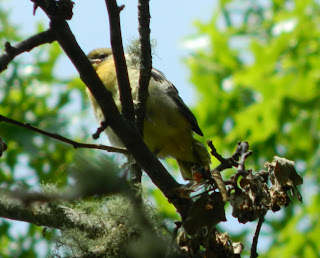