This is SUCH a perfect time to be bringing students outdoors looking for and listening for birds!  On the way in to Wixon, I spotted an American Robin in a side yard of the school.  I KNEW this was a terrific sign that we'd be spotting birds while we were outside today!  I was right, with the American Robins as the star of the show!  As soon as we headed toward the field, we re-spotted the same bird I'd noticed on the way in...
I asked the bird nerds to slowly and QUIETLY (challenging) approach the bird.  Well they did a FANTASTIC job!  We were within a very close proximity to this American Robin.  He was hungry!  I asked everyone what they thought he was doing?  They all agreed he was hunting for worms.  What was he doing with the worms once he caught them?  Eating them right up!  Exactly.

Spring has arrived late, as it often does here on the Cape.  The birds, though they are beginning to pair up and possibly mate, are busy keeping themselves well-fed gearing up for mating and staying healthy and strong.  There are no young yet.  We discussed that if we saw this American Robin, or any other bird species, flying off with a beak full of worms/bugs, what that meant...?  They quickly confirmed that it meant the adults were off to feed babies if they had a full beak. Precisely right again!  When you pay attention to details like that, you'll often be rewarded when you're enjoying and exploring nature.  Most of us are fascinated, if only for a second, when watching birds feed their young.  While for many of us food=love when it comes to creatures, food=survival for wildlife.  It's not an easy time for them.  When we can take the time to appreciate how very important they are in a healthy ecosystem, well it's all the better for the birds, and for us as well.

We almost got to see a large bird of prey when we entered the woods... I caught a second or two of this big bird flying from a low branch in the woods, either perching higher up, or flying off completely.  Unfortunately, it took too long to remind some of the bird nerds of the tricky tools: Patience & Quiet.  We are a large group.  We make a lot of noise, especially when we're excited, and we get excited about birds.  They'll learn the balance... if they want to see more and more birds... 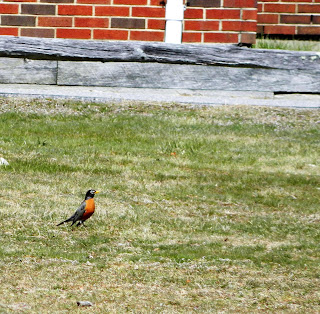 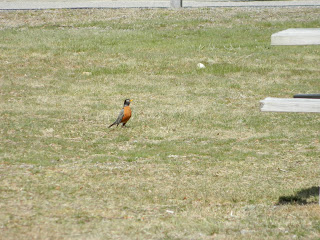 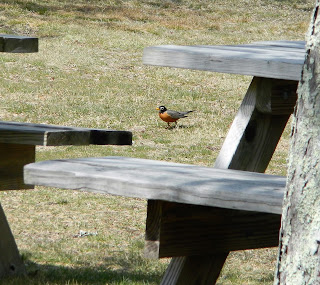 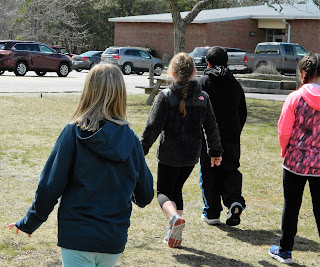 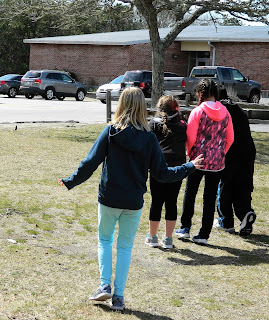 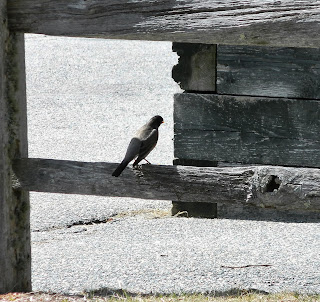 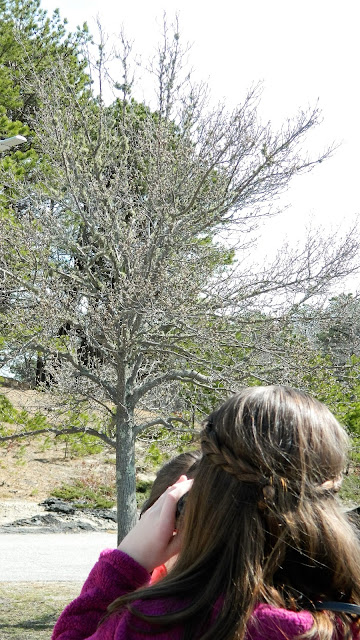 Checking out a Tufted Titmouse, before s/he flew off... 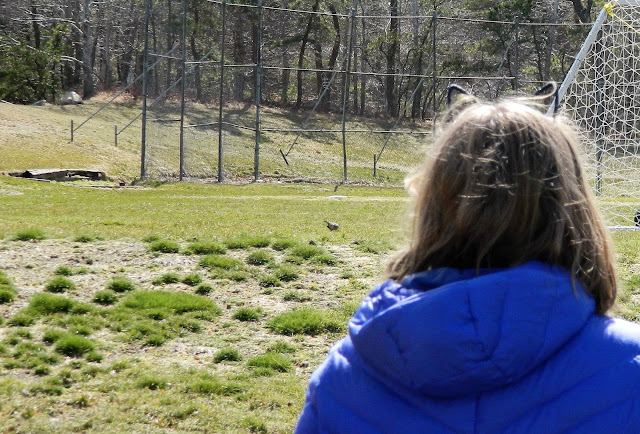 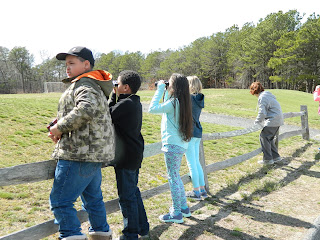 The field had 14 American Robins all over it! 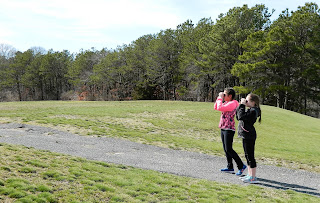 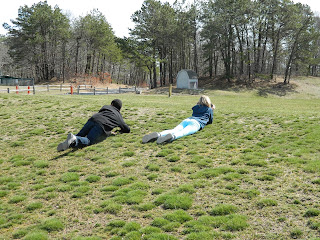 New specialized binocular stealth technique...
which they came up with on their own! 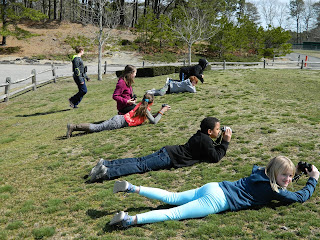 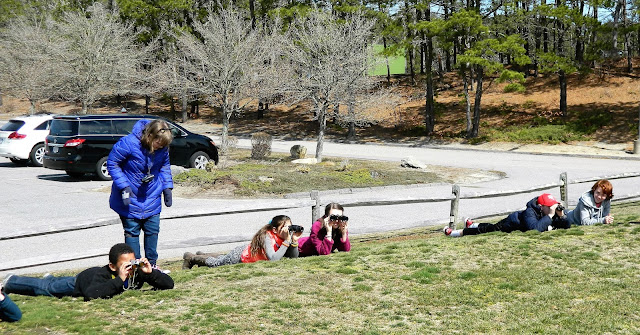 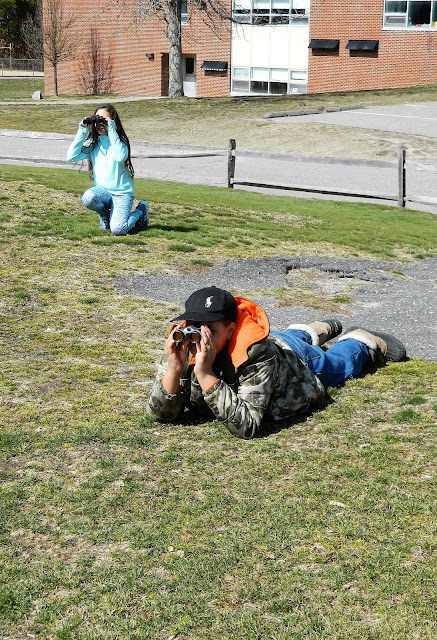 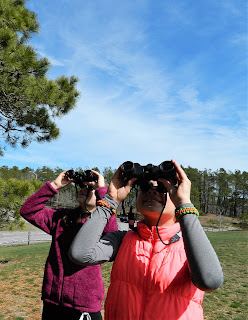 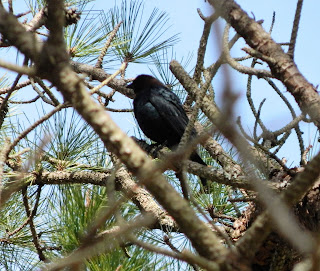 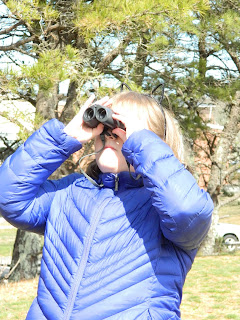 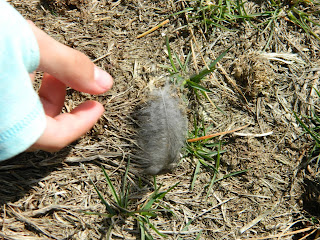 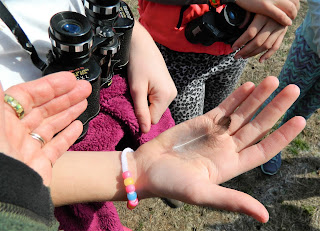 I called it an "underpants" feather...why?  I asked them...
because of the fluffiness. 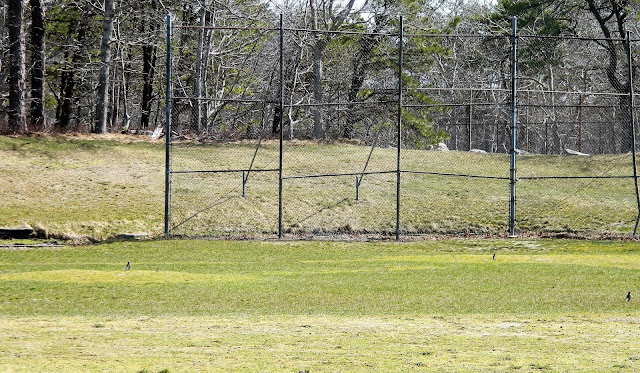 Hard to see, but one of the bird nerds said it looked like the robins were playing baseball, with one on the pitcher's mound, one in the batter's box and one waiting in the infield...  : ) 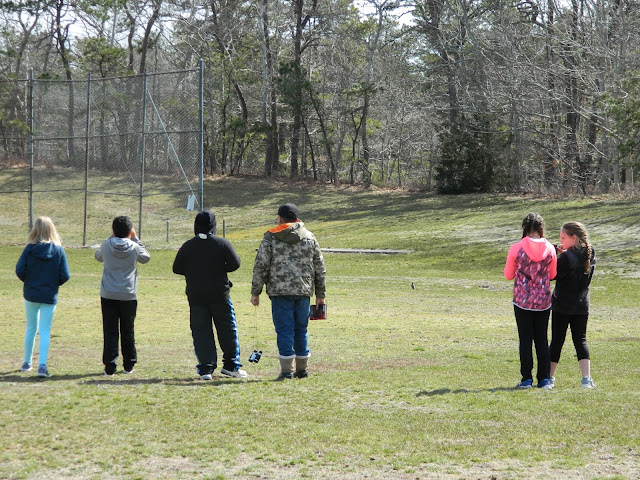 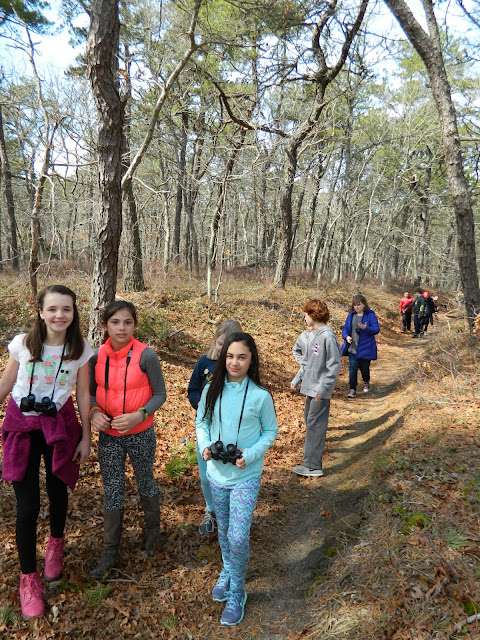 Coming out of the woodsy trail behind the school... there never
seems to be enough time to explore